For a while, Lena’s been asking.

I pass it off.

– Whose Mama? Mine or yours?

She’s almost forgotten mine. Hers is still very much in her mind. ‘This reminds me of my Mama’s kitchen’, she’s always saying as I’m preparing food. But it isn’t her Mama she’s looking for.

She shrugs, not really believing me, but not ready to pursue it.

But today Alzheimers came up with a new question.

– Where did that man go?

– The one who was here this morning.

– I don’t think there was anyone here this morning.

– The window-cleaner, you mean? He was here yesterday.

I don’t know who Lena’s talking about. I try to get her to tell me what he does, where he was when he came, what he said. But she just can’t explain. And as she struggles, her agitation grows.

– I don’t think I was very nice to him. That’s not like me. I didn’t mean to be nasty. But I’m worried he might not come back again. And I really liked him.

So who was it? I didn’t find out. I suggested lunch. Food usually works. And the moment passed. 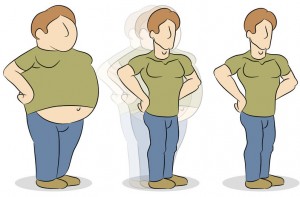 But now, thinking about it again, I think I know who it might have been.

The old me, before I started getting fit and losing a few trouser sizes. Friends have mentioned how much it’s changed my appearance. Last night my daughter told me how my head suddenly looked too big for the rest of my body.

Was it the old, regular-sized Alan that Lena’s missing?

I hope my new regime isn’t a mistake.

Other stories from our Alzheimer’s life:

Coming Out On Alzheimers – Being Normal – Changing Room Blues – Whose Truth Is It Anyway?