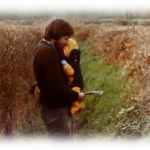 I never thought I was cut out for fatherhood. For a start I had no role-model – my dad died when I was just a nipper. And I’d never been around small kids. The cute baby thing? Well, to me they all looked the same – like little piglets. As for picking them up … well what if I dropped one?

But when we had our first, everything changed. Of course Edwin was cute. Dropping him? How was that even possible? (And even if I did, at least he was mine.) No-one needed to tell me what to do. Instinct just took over and I muddled along.

Like the first time Lena decided to leave me alone in the house with our two-week-old baby. She hadn’t been gone two minutes when our sweet little bundle of joy started grizzling. I took him in my ams. Now it was proper crying. I sang nursery rhymes. He bawled. I paced round and round the room with him, still singing, Now his tiny little heart was breaking.

So I did what any clear-thinking dad would do. What did Lena do when he cried? She fed him of course. In the absence of Lena’s breasts what similar-shaped object could I use as a substitute, a placebo? Yes, that’s it – my nose. As those fierce little gums tightened themselves around me, I know I’d fixed it. When Lena got back as promised a couple of hours later, she found a contented Edwin, and a husband with a nose like a radish.

You won’t be surprised to hear that I never won any awards for being a father. In fact, nobody ever commented on my parenthood skills at all (- well, except for a couple of ‘Best Dad’ Father’s Day cards – but the kids knew that a little flattery was the best defence against grounding). OK, so you’re a dad. You just do dad things.

It’s different when you’re a caregiver. Everyone says such nice things. ‘You’re doing a great job’. ‘Lena’s in such good hands.’ It’s as if I’d chosen some noble calling. Well here’s the truth of it. There’s nothing noble about it at all. I’m simply facing the situation I find myself in. I muddle along, just like I did as a dad. Sometimes I manage it pretty well; often I don’t.

Right now for instance. Here I am on my computer, writing this story. Downstairs I can hear Lena pacing. Talking to herself. Big deep sighs. She needs me there, she’s signalling. Come and talk to me, entertain me, give me something to do. But I’m not going just yet, because this is my me-time. Without it I’ll be frazzled.

I’ll bet that busy mums at weekends and holidays know exactly how I’m feeling. The kids haven’t given you a minute all day. You’ve been washing, feeding, cleaning up after them, organising, yelling, feeding again … a never-ending cycle of thankless tasks. You don’t feel like this all the time – you really love the little darlings – but if you could just get a moment to yourself. At least on Monday they’ll be back to school and you’ll be back to work …

Here’s the problem for the full-time dementia caregiver. There is no Monday, no school, no work, no break. All the days are the same. That’s why, even though my job is no more heroic than being a mum or a dad and I’m just doing what comes naturally, the working conditions are harder. And that’s what I mean to fix with The Care Combine.

So it’s not admiration or sympathy I want or deserve, but I would like your help. No, don’t worry, I won’t be asking you to lend me a nose – it’s ideas I’ll be looking for next time when I describe exactly how The Care Combine’s going to work. I’m going to invite you to join me in a little brainstorming exercise that could change the lives of thousands of people – so don’t miss it.

To make sure you don’t miss future posts, why not follow the Ctrl Alz Shift Facebook page – it’s also a good place for easy 2-way discussion of the posts. Just click on the FB button below.